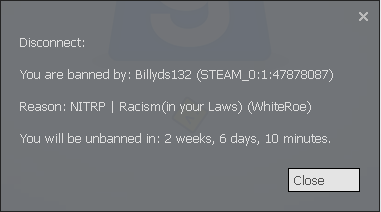 Why should you be unbanned?:

I'm unsure which of the many laws I put up caused this, I was not warned beforehand, just banned on the spot. I do admit I may have been pushing it, but a force demote or sit would've worked instead of a sudden 3 week ban. And bare in mind, MassRDM is only 1 week. Is it wrong to roleplay as alternative, perhaps extreme idealogies? The laws wouldnt've been enforced anyway since all cops are ba- minges. I should be unbanned as I wasn't saying anything like "KOS all blacks", I was imposing laws that couldn't even be enforced. If staff came up to me and told me to remove then immediately, I would've. Nobody told me they had a problem with the laws until the moment I got banned.